As I continue my self-study journey to learn JavaScript at a foundtaional level, the topic of Prototypes has come up a lot. This post is my attempt at explaining it to myself (and others!) The goal of this post is to practice my “public-learning”. Feedback from others is among the benefits of learning in public, so let me know what you think!

Feel free to skip this if you know what a JavaScript object is.

To get started, let’s create an object. An object is simple a pair of key and value pairs. Like this:

To look up the value, we type something like this:

We can also add properties to an object, like this:

Now, if we output the object, it will look like this:

objects can have simple properties like strings or numbers, but they can also have actions a.k.a methods a.k.a functions.

Then to run the method we type:

Let’s see how prototypes works with a special object called the Array.

And then to output one of the values of the list:

Where 0 is the key and “Toy Story” is the value. A key-value pair!

The movieList is actually a special type of object! Remember how we added properties to objects before. We can do that with Arrays too because they’re just objects! 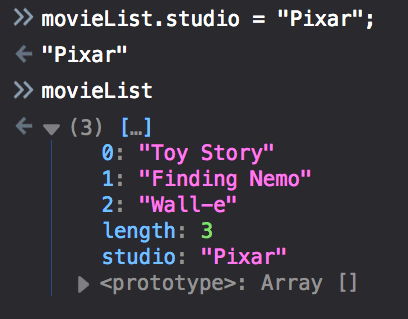 In JavaScript, when you try to look up a key on an object, and the key doesn’t exist on the current object, JavaScript will look up to the prototype to see if the prototype has the key.

The movieList is basically saying something like this “If you can’t find what you’re looking for in my keys, go look at my prototype to see if you can find it there!”

So where did the prototype come from? We didn’t create it, so how did it show up?

But really, whenever you create an Array like the movieList we created, JavaScript gives it a prototype that points to the Array.prototype, which is a built-in prototype in all JavaScript environments.

Let’s look at an example to see how delegating to the prototype works.

See that last line <prototype>: Array []? That’s the prototype for the movieList array! We can lookup what the prototype like this: 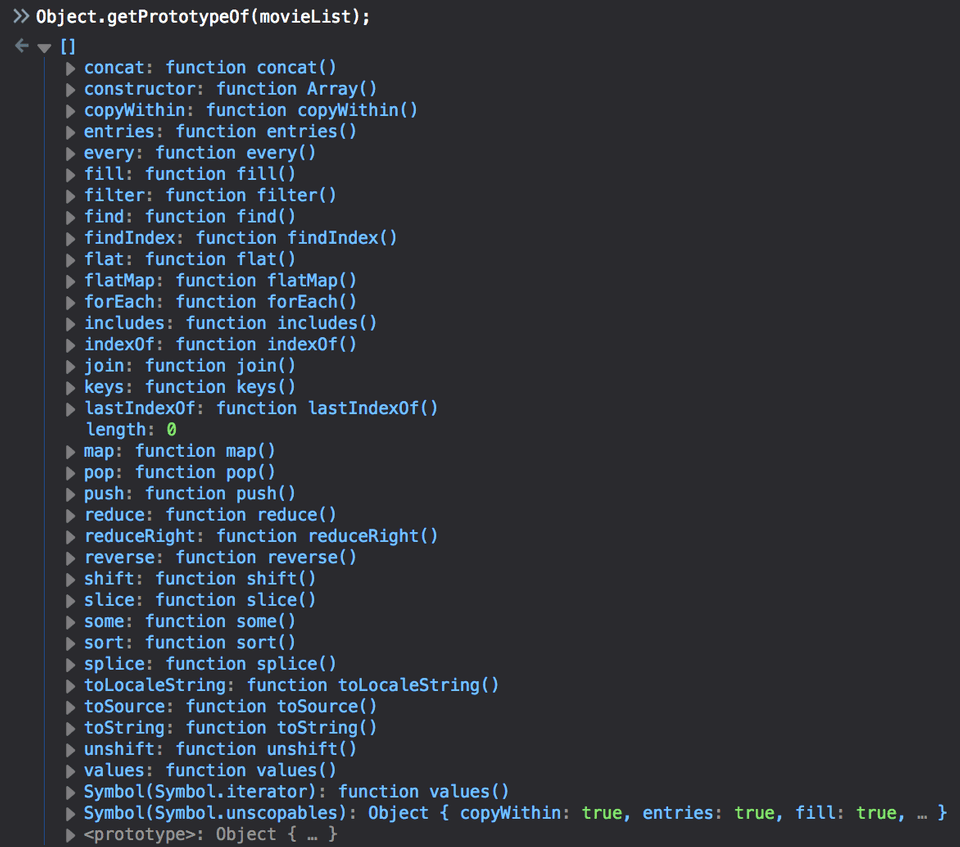 So we can call something like this, which will combine arrays:

Here’s my goofy dialogue for what’s going on with the above code:

Me: Hey, JS, could you call the function concat on the movieList object with this argument: [‘Mosnters Inc']

[JS walks over to movieList]

JS: Waddup movieList! Do you have a method called concat?

movieList: Hmm… nope! Go ask my prototype Array.prototype, they might have it.

[JS walks over to Array.prototype]

JS: Hey Array.prototype do you have a method called toString?

Array.prototype: Sure do! Here you go!

[JS uses the concat method with the values in movieList and the argument ['Monsters Inc.']]

[JS walks back over to me]

Me: Gee, thanks JS! You’re so resourceful. Even when you first don’t find the function, you went to the prototype to see if they had it. You’re hired!

Here’s an illustration on how JS looks for the concat function:

Now that we have the concept down, let’s have some fun with it.

To illustrate that we’re using the Array.prototype.concat method, I’m going to modify what that method does. 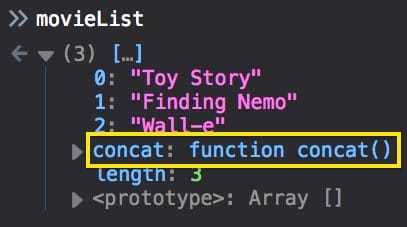 Now, when we call it, we get a different output!

That’s because JavaScript found the object in movieList - it didn’t have to go to Array.prototype to look for it.

Ok, ready for some more fun?

Let’s try it out!

Danger: Don’t do this in your code. It will break all of the things (as you’ll see). I’m doing this for the sake of education.

Now, if we call it again:

We just broke a method on the Array.prototype! It even broke it for arrays we didn’t create yet! That’s because arrays always point to Array.prototype which is just an object with methods sitting in the global scope. So if we update that object, all of the objects linked to it will inherit the updated method. The future arrays that we create will point to that same object!

What’s important to remember is this:

Side note: modifying one of the built-in prototypes like Array.prototype is called monkey patching, and it’s not a good idea.

There’s an experimental feature called __proto__ (pronounced “dunder proto”) that allows you to get and set the prototype of an object. It’s basically a key that’s added to the object that points to the object’s prototype. It’s deprecated and not recommended by MDN but I’m going to use it for educational purposes. It still works in most browser, but don’t use it.

Since __proto__ is just a key, we can change where it points: 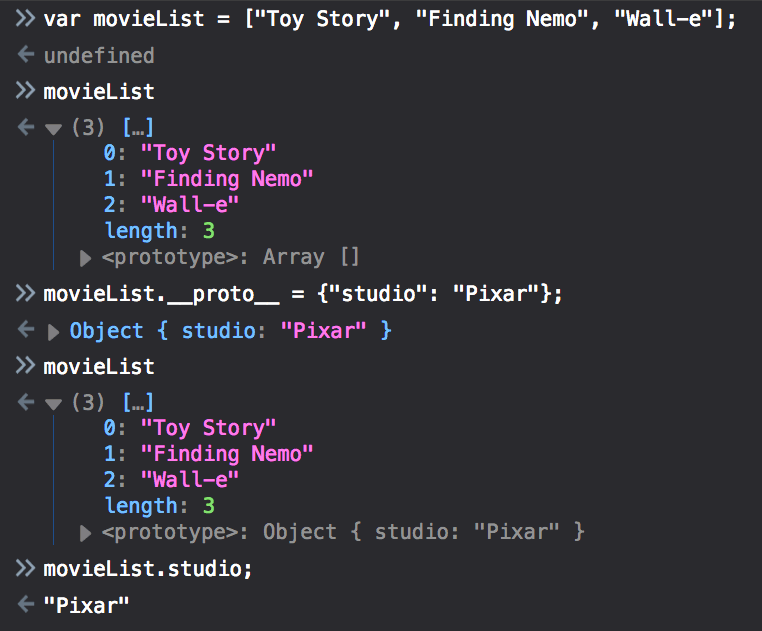 Now the prototype for our movieList array is a completely different object. The pop method doesn’t exist anymore because it doesn’t use the Array.prototype anymore.

Let’s undo what we did so we can access the Array.prototype methods again:

Now that we understand prototypical inheritance, let’s look at a practical example of why this knowledge is so helpful.

Let’s say we want to select all of the paragraphs on a web page:

Now, we want to find the paragraphs that have the word “Found” in it:

Oh no! Why didn’t that work? I selected a bunch of elements, so I should be able to filter through them, right?

The error says that paragraph.filter is not a function, so let’s look at the paragraph’s prototype. 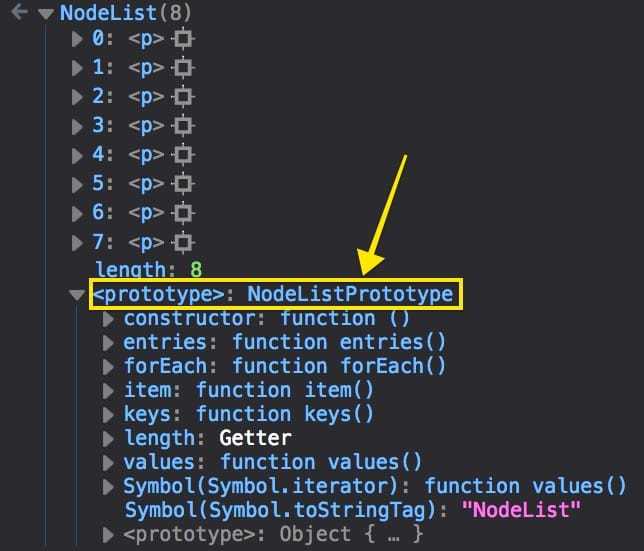 So the querySelectorAll function created a list of the Nodes and used the NodeList Prototype instead of the Array prototype (this is the default behavior, by the way).

The NodeList prototype doesn’t have a filter function, so that’s why we got the error!

It might be tempting to just change the prototype of the paragraphs object, but this is a bad idea! Not only would this not work because filter expects an Array not a NodeList object and it would also de-optimize the JavaScript engine. See this blog post about the performance implications of changing an object’s prototype.

Instead, we should create a new object from the paragraphs object that uses the Array prototype, which has the filter function that we’re looking for.

Note: there are many many ways to convert a NodeList to an Array, this is just one of them.

Let’s see what the prototype is now. 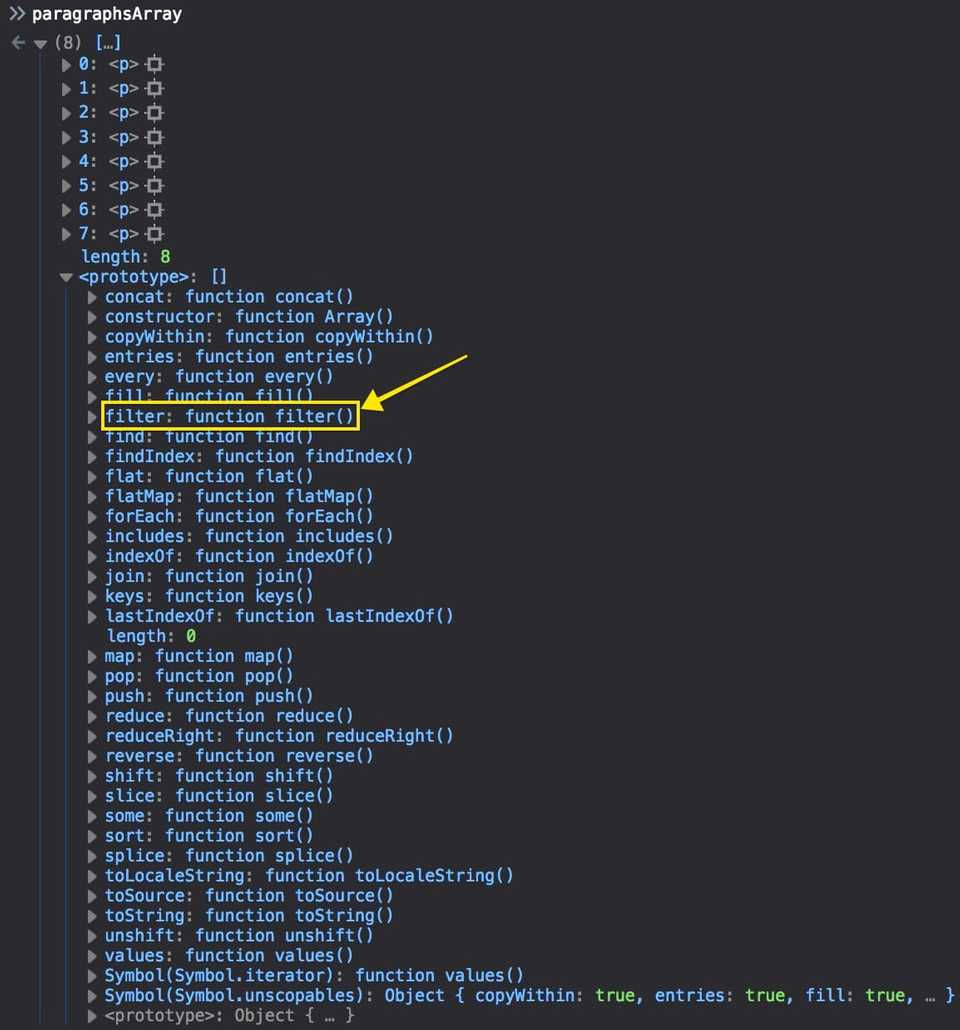 Now we can run the filter on the paragraphsArray

I highly recommend Tyler McGinnis’ explanation of prototypes: A Beginner’s Guide to JavaScript’s Prototype. He goes into depth on how to create prototypes.

For performance optimizations with prototype method look ups, check out JavaScript engine fundamentals: optimizing prototypes · Mathias Bynens. The key point to remember from that article: don’t modify prototypes! I modified prototypes in this post simply to demonstrate how they work, not as a best practice scenario.